Some people have an amazing ability to inspire us. The kind of people who have always inspired me the most are those able to see goodness in others and to keep an open heart through experiences of poverty, unfairness and violence. Growing up as an empowered, educated woman in a loving family – never having to fear for my safety or to go to bed hungry at night has given me all the preconditions for a good life with a surplus of mental resources. Even so I can easily feel unfairly treated and defeated – ready to crawl away and hide under my duvet at night. A feeling that I believe come to all people now and then, no matter where in the world you are born. It’s just a part of being human I guess. Knowing how fragile one can be in all corners and places of the world – I also understand why it can spark extreme feelings of anger and resentment in your soul, growing up in an unequal and poor society – were it’s as if your voice is never heard no matter how loud you scream. You might start to feel so empty inside that you neglect your children or so desperate that you begin taking what you need with force. There is never an excuse for abuse or violence but sometimes there is an explanation. But here it is, once in a while, that these determined and big-hearted people come along, who still, after enduring torture, poverty and inequality find it in themselves to see the best in other people and to choose the peaceful fight. Nelson Mandela was definitely one of these people. I can honestly say that he was one of the human beings on this earth that I admire the most. His way of showing compassion and forgiveness and his determination to unite South Africa is nothing more than extraordinary. He was made out of ‘special stuff’ – equal to Mahatma Gandhi or even Malala Yousafza. It is this ‘special stuff’ that some people have and are able to hold on to through all the evils of the world that inspire and comfort me. Because to me it is a symbol of how compassionate, forgiving and kind people can be. Mandela gave a lot of South Africans a new hope for a better life for themselves and their families – and he inspired even more to follow in his footsteps. One of these South Africans was Babalwa Thembani, the young woman I met during my fieldword and who died of AIDS when she was only 28 years old. To Babalwa, Mandela became the symbol of hope – he made her believe that life can change to the better – that people can change to the better. A revelation that made her work for vulnerable and discriminated people in her own society. She represented the South African spirit of ubuntu (believing in humanity towards others) that Mandela was determined to heal and to keep growing. 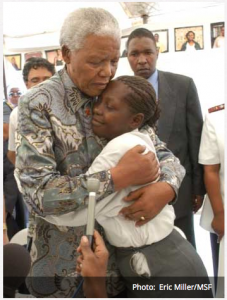 Read about Mandela and Babalwa’s meeting here. I know that today many of my South African friends worry about the continuously growing crime rate, the poverty and social inequality in the country. My  own and their hope is that Mandela and Babalwa’s fights for a more compassionate and equal world will continue in South Africa – and anywhere else around the world. After all it’s all up to us :)