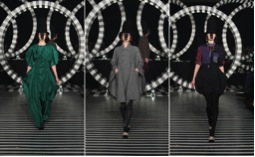 Not only is the name Henrik Vibskov associated with a fashion label but also a multitude of twisted yet tantalising universes created in relation to each collection. “The Transparent Tongue“, “The Spaghetti Handjob“ and “The Shrink Wrap Spectacular“ are just a few titles of shows Henrik Vibskov has produced lately, each title referring to a different but equally mesmerizing world and set of logic. As a fashion designer Henrik Vibskov has produced over 25 mens (and later also women’s) collections since he graduated from Central St. Martins in 2001, and as a member of the Chambre Syndicale de la Mode Masculine he is currently the only Scandinavian designer on the official show schedule of the Paris Mens Fashion Week, which he has been since January 2003. The collections are sold through thoroughly selected shops across the globe and artist and musicians like M.I.A., Björk, Artic Monkeys, Sigur Ros, Franz Ferdinand, Lou Reed, LCD Soundsystem and Devendra Banhart have been spotted in Henrik Vibskov’s designs.

What motivated you to join NDA?
We’re currently working towards a higher degree of sustainability which is challenging when you’re a small, creative design company in a big world. We became interested in the project because you have a vision and want to help others – and particularly because you want to help young mothers gain a creative/design-oriented education. Also, we would like to make a difference in our business and supporting a project that creates a specific kind of value makes more sense to us than throwing out old products.

Who is your typical customer?
We have a large customer base – consisting of both men and women

Name three things that make the world a better and more beautiful place according to you.
Sharing is caring, freedom and colors.

Name three things that the world would be better off without.
Hate, selfishness and pollution.